What To Do If The Lights Go Out

We as DJs always try to prepare for the worst thing that can happen during an event. During my 22 years in business, I have had a tripped breaker, tornadoes come through town, and even had a roof collapse but never have I lost electricity. Well, this past June that happened.

First, let me set the stage. I live in a small town in Central Arkansas, named Beebe. The wedding reception I’m speaking about was located at the top of Magazine Mountain, which is located three hours south of a small town named Paris.

This means we had to load in backup equipment for everything – except a generator which I don’t own because we had never lost power before.

We drove to Magazine mountain state lodge, set up for the reception, and a half hour before show time a huge tree halfway down the mountain got hit by lightning, effectively falling across the main power line for the lodge. Emergency lighting came on and everyone scrambled around trying to figure out what to do.

For most of us, our performance would have ended before it even started but I was prepared with a “Plan B” because I believe in taking care of my clients in every situation, no matter how dire. I believe that as DJs/MCs we should be trained to handle any situation that comes along – especially with a wedding reception so it isn’t a disaster.

Ceremony Lighting. My wife and I both keep jump packs in our vehicles just in case. While the jump pack that I have only has a small battery, it can be used to power 2 or 3 LED uplights, so we took these lights and using extended power lines we were able to light up the room for the couple. Secondary lighting was provided by the candles the clients had already decided to use during the reception. This allowed us to run these up lights for about an hour.

Music. I have always believed that you should always back up your music for a reception, now I don’t mean every song on your computer, but back up the main songs. The ceremony music – prelude, bridal entrance, special, and recessional, and any main music that you use for the reception, grand entrance, first dance, father/ daughter etc. on something other than just your PC or Jump Drive, we back up the music 4 times, 1 jump drive, 2 iPads and one iPhone. this way if the worst happens you still have access to the music.

Accessories. We carry an ION Explorer 100 watt Bluetooth Speaker, Battery powered, lasts for about eight hours on a full charge, plus has a USB charging deck and microphone input. Also, keep the top 200 most popular songs loaded on a secondary machine. We use an iPad for this as the speaker we have will allow us to keep it charged, plus we keep The app Deejay on the iPad knowing that at some point we may have to use it to DJ.

Laptop. Know how long your laptop will work without being plugged in by testing it one evening leaving it unplugged and setting a timer until the laptop fails.

Game Box. This is a tote that we keep in the trailer containing props, signs, and just little odds and ends that we can use for games.

Every good boy scout learns to be prepared. We DJs can take a lesson from them and do the same. 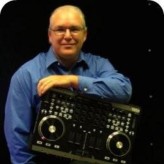 “Purveyor of music across decades and styles in a perfect mix .” That’s how Robert describes himself as a entertainer. Never afraid to have fun, his wedding receptions are a perfect mix of Broadway style blocking and transitions and good old southern charm. Having grown up on his families eclectic combination of Outlaw country, (Waylon Jennings, Willie Nelson), 70's -80's Hard Rock, (Kiss, Iron Maiden), and synth-infused pop 80s (Prince, Alan Parsons Project)… all which became infused with his own love for both early hip-hop and southern rock music, Robert ended up with quite a mixed spectrum of musical influence. Today, this translates into sets that will take you back into yesteryear and send you flying into today's hottest hits without ever missing a groove, A very active member of his local community, Robert is no stranger to the ups-and-downs of a small-town music scene. Though he loves playing in nightclubs, patios and special events, his love for music goes beyond the spectrum of mixing tunes. As a wedding entertainer he found a love for making the perfect show seamless, from those very first introductions till the final dance is played, every moment is like a beautifully choreographed Broadway show, where the stars are the Wedding Party. “For me, it’s all about making that day seamless, to let the wedding party and their guests relax and enjoy the day, knowing that everything is handled"

Wedding Day Emergencies – Save the Day!